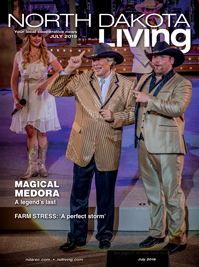 Select a State for More Information

Established in 1954, North Dakota Living has the largest circulation of any publication in the state. It is published monthly and mailed to members of 19 rural electric cooperatives and two telecommunications cooperatives serving North Dakota. Urban residents represent more than half of the magazine’s readership. A complimentary mailing is also sent to state and federal government officials, community leaders, school and public libraries, and professional and business offices.